Last weekend, my cousin and his band Flow Tribe were up from New Orleans on tour.

Somehow this visit resulted in my cousin and teenage son dragging me out to “experience nature” (which translates to “fishing” on the Louisiana side of my family) and I discovered, much to my amazement, that there’s a 210 acre lake in my neighborhood.

Now, to my credit, I HAD heard my two boys discussing said “lake” in the eight months since we moved to Maryland, but I assumed they were really discussing some far-off body of water or the run-off ditch in front of the house.

(Suddenly the pleas for the purchase of kayaks back in August are starting to make sense. I feel a little silly now for laughing my ass off at the thought of them sitting in their big yellow kayaks in the mud puddle at the end of our road.)

The closest I normally get to “nature” typically involves me getting naked with Mr. Hilarious, but few things in life are better than a great big whopping fish story, so when my son pulled out a tackle box and asked if I wanted to go fishing with him and my cuz – I agreed.

When my son informed that I wouldn’t need the car keys, lawn chairs, sunscreen, mosquito repellent, fried chicken, Gatorade, solo cups, and box of wine I was packing for our trip – I did what any good parent would do. I punched him on the shoulder and told him to quit lying.

Imagine my surprise when we walked a half block to the culdesac, down a flight of stairs, and arrived at an actual lake. I’m really not making this up – see? 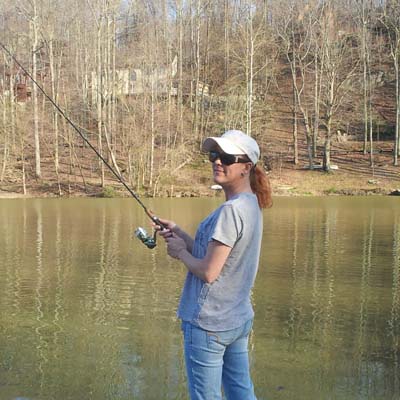 And then I caught the biggest fish EVER.

Then I cried because the poor fishy was flopping around and making these horrific gasping faces while I blubbered frantically,

My amazement of the day’s events grew even larger when my son put down the camera he was pointing in my direction, calmly walked over, slipped his hand around the fish WITHOUT stabbing himself on the pointy little fins, unhooked it and tossed it back in the lake.

We stood there watching it swim away and he said, “Mom, you do know that Nemo lives in the ocean and this is a freshwater lake right?”

I looked at him and had to swallow the lump in my throat when it dawned on me that he wasn’t a little boy anymore – he was nearly a grown man who could save a dying fish and knew the difference between freshwater and saltwater.

I was worried someone would notice me sniffling again, so I punched his shoulder and said, “I liked you better before you could talk Mr. Smarty Pants.”

It turned out to be a beautiful day and I got my fish story. And now that I know the lake is so close – next time I’ll take my red solo cup and my box of wine so I can stay longer than 30 minutes.